What are Simple Function Points

Simple function points (SiFP) are a quick-to-learn and quick-to-use software functional size estimation technique.  The fundamentals of SFP are aligned with first generation IFPUG function points, less precise but quicker to get a first estimate.  SFP are an approximation of IFPUG FP by treating all data functions as average in size.  This simplification means there is no need to know all data element types (DETs) nor Record Element Types (RETs) ,  it treats all object types as equivalent in size and complexity.   A similar approach is applied to the Data Transactions, these too are all treated as equivalent in size.   The combination of these two short cuts, makes SiFP to be a fast way to estimate the size of any system.

ScopeMaster® automates sizing in SFP (as well as IFPUG and COSMIC Function Points).

One of the problems with traditional IFPUG sizing (although not a problem for COSMIC) is that the information required to count function points according to the rules is often not available at the stage when knowledge of the size is most important.  SiFP is a simplified sizing technique designed to address this problem.

Simple Function Points are a simplified approach to estimating IFPUG function points.   The concepts are the same, but the analysis required is less detailed and much faster to perform.  SiFP do not require the level of detail necessary for an IFPUG count.   SiFP is not compliant with the ISO standards that apply to an IFPUG or COSMIC size.  SiFP have grown in popularity in the last two years, especially in the USA.

ScopeMaster does it for you.

ScopeMaster analyses written software requirements or user stories to determine the functional intent and functional size.  It then generates SiFP estimates to help you size and plan your software endeavour. 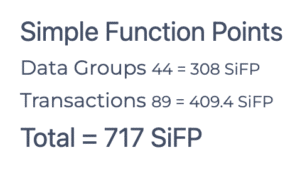 When determining a SiFP count, it is essential to correctly identify the data groups being maintained by the software.   If the requirements are young or incomplete, we might have to anticipate from a single reference to an object type that it is intended to be fully maintained data.  To accommodate this, ScopeMaster offers a range of analysis approaches that allow you to determine the most likely size estimate applicable.

ScopeMaster does the heavy lifting.

From these automated simple function point estimates, you can also spot how to refine your requirements which in turn will help to improve the accuracy of your size estimate.

Further reading:  here’s a useful description of Simple Function Points by the folks at QSM.  And here is the introduction to SiFP by IFPUG who are the guardians of the method.